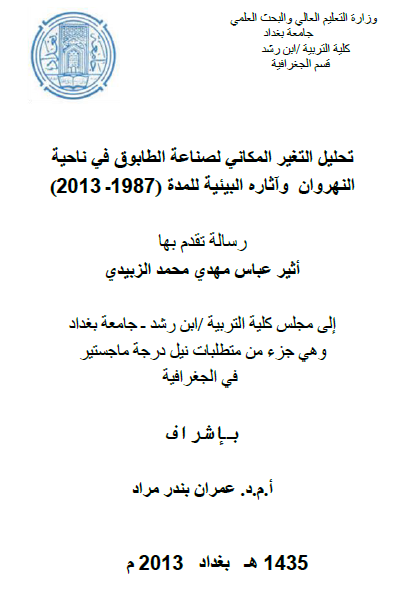 A PhD Dissertation submitted by

To the Council Of College of Education – Ibn Rushd– Baghdad University As Partial Fulfillments For The Requirements To Award M.A. degree in Geography 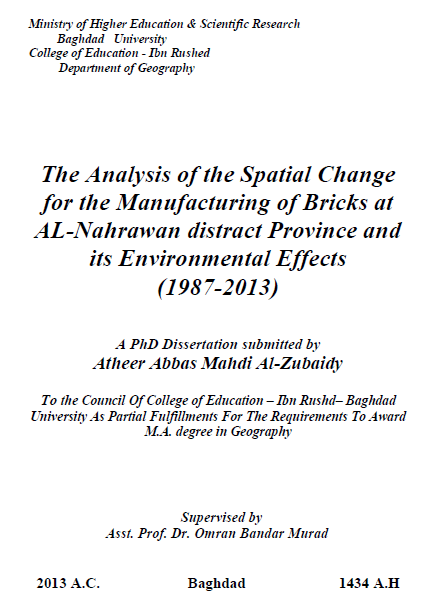 Industrial complexes are regarded as a modern method for industrial projects and establishing them in a manner that reduce the economic costs of the existing factories through the reduction of the costs of transportation, marketing, and other services. The care of the state with industrial complexes has many reasons like the industrial development. The pollution made the state decide to move them outside the city.  They have bad affect manifested the beauty of the city. Consequently, the Industrial complexes become an instrument of terminating the economic backward and achieving social prosperity in the less developed areas like the country.

The study was subdivided into four chapter; the first two chapters represent the theoretical and applied side. Chapter One is entitled (Characteristic Natural Geography) and (Population and their economic characters features), while the second chapter tackle the manufacturing of bricks (its development and the manner of making and types and uses).

The third chapter tackle the study of industrial settlement in Al-Nahrawan Industrial complex. The researcher indicated to the preliminaries before the stage of settlement with a discussion the investment and the justifications and the incitements , then the land uses. In addition to the future prediction of the brick industry by use of SPSS which was  predicted in 2020.

Chapter Four examined the problems from which brick industry suffering in Baghdad Governorate which can be included in five points:

1.  The problem of power and fuel.

The second inquiry tackled the pollutant and the effect on Baghdad Governorate.

The basic means of establishing Al-Nahrawan Industrial complex is to reduce the effects resulting the manufacturing of brocks and tanning on Baghdad city.

The architectural affect show that in the building of Al-Nahrawan province (formerly Saddam city of Al-Nahrawan) which is dedicated to the residence of the workers in the complex. It is located 9 km away. The most important problems which the complex suffers from are the rarity of water resources.

The research suggest that that study should put a plan to cover all he country on the city and country level, and to start building comprehensive complexes for the reduced cost of building. For the purpose and using alternative power (natural gas for example). This type of energy reduces the pollution rate instead of burning it or by extending the oil pipelines and derives in Al-Dura refinery to the complex/ to provide the Industrial complexes with the fuels  to reduce cost.
تعديل المقال
الأقسام الجغرافيا الاقتصادية رسائل علمية