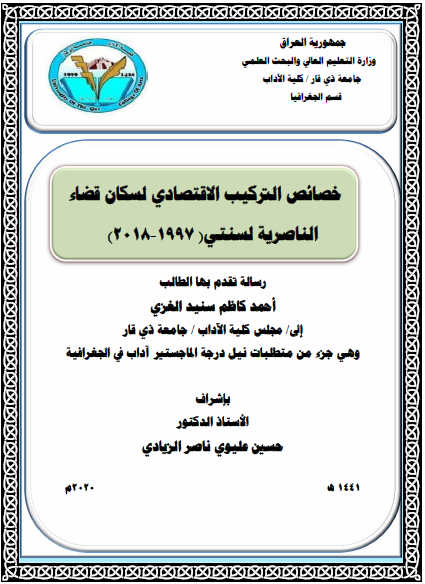 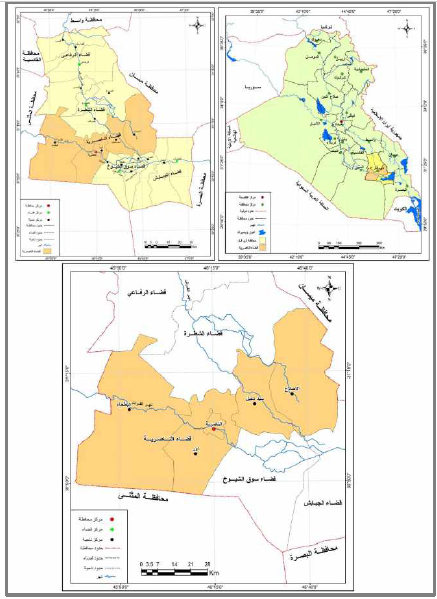 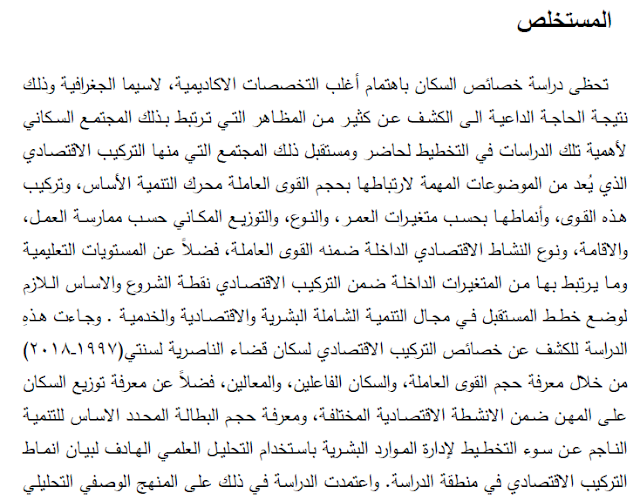 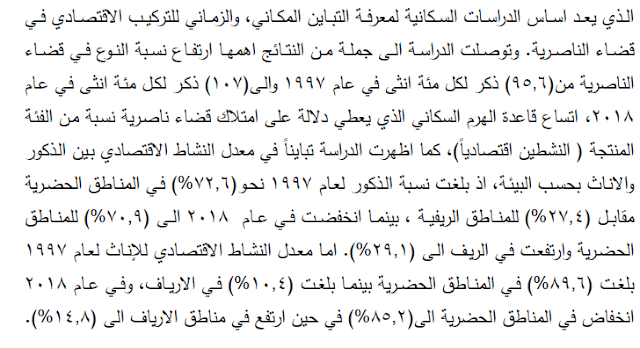 CHARACTERISTICS OF THE ECONOMIC
COMPOSITION OF THE POPULATION OF
AL-NASIRIYAH DISTRICT FOR TWO YEARS
(1997 - 2018)
A Thesis submitted by
Ahmed Kazem Snead
To the Council of the College of Arts
Dhi Qar University
It is part of the requirements for a master’s degree in geography.
Supervised by:
Prof. DR. Hussein Aliwi Nasser Al-Ziyadi
2020 A.D. 1440 A.H. 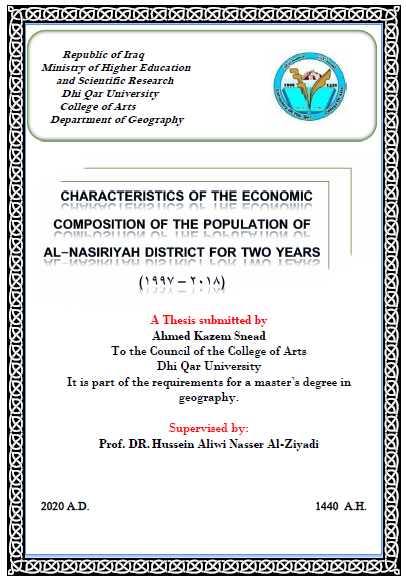 Abstract
The study of population characteristics receives the attention of most academic disciplines, especially geography, as a result of the need to reveal many aspects that relate to this population community because of the importance of those studies in planning the present and future of that society, including the economic structure, which is one of the important topics for its connection with the size of the workforce, the engine of development Basically, the composition of these forces and their patterns according to the variables of age, gender, and spatial distribution according to the practice of work and residence and the type of economic activity included within the workforce, as well as educational levels and associated variables within.
The economic composition is the starting point and the basis for setting future plans in the field of comprehensive human, economic and service development. Accordingly, this study came to reveal the characteristics of the economic composition of the population of the district of Nasiriyah for my year (1997-2018), by knowing the size of the workforce and the active and dependent population, as well as knowledge of distribution Population on occupations within the various economic activities, and knowing the specific size of unemployment, the basis for development resulting from poor planning for human resource management using purposeful scientific analysis to indicate the patterns of economic structure in the study area, the study relied on that For the descriptive analytical approach, which is the basis of population studies to know the spatial and temporal variation of the economic structure in the district of Nasiriyah, the study reached a number of conclusions, the most important of which is the high percentage of the gender in the district of Nasiriyah from (95.6) males per hundred females in 1997 and to (107) males per hundred females In 2018.
The population base of the pyramid, which gives an indication that a Nasserite district owns a percentage of the productive category (economically active), has expanded, as the study showed a variation in the rate of economic activity between males and females by environment, with the percentage of males in 1997 reaching about (72.6%) in Urban areas compared to (27.4%) for rural areas, between A declined in 2018 to (70.9%) for urban areas rose in the countryside to (29.1%). As for the female economic activity rate for the year 1997, it reached (89.6%) in urban areas, while it reached (10.4%) in rural areas, while in 2018, a decrease in urban areas to (85.2%), while it increased in rural areas to (14.8%).
تحميل النص الكامل
⇊
↲  top4top
↓
↲  mega.nz
تعديل المقال
الأقسام الجغرافيا البشرية رسائل علمية