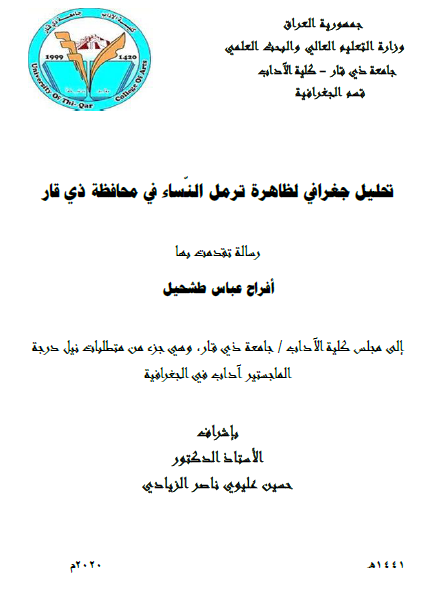 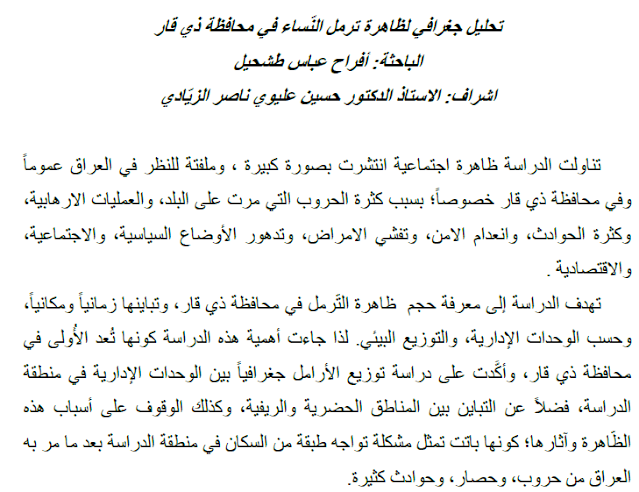 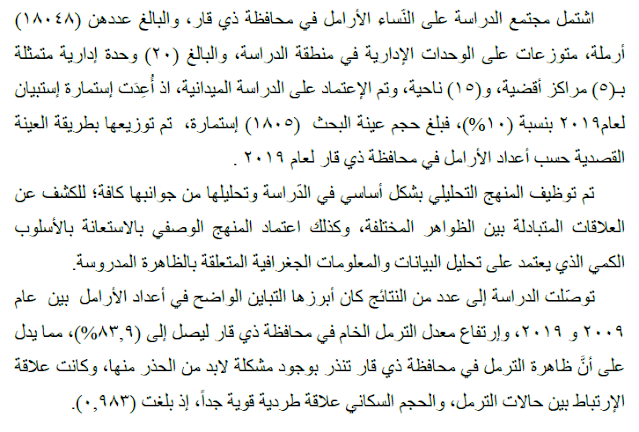 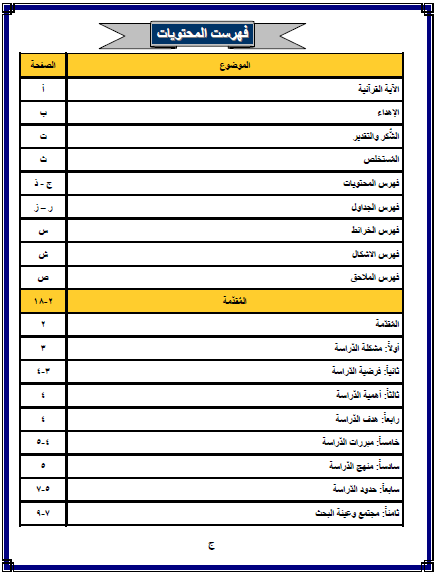 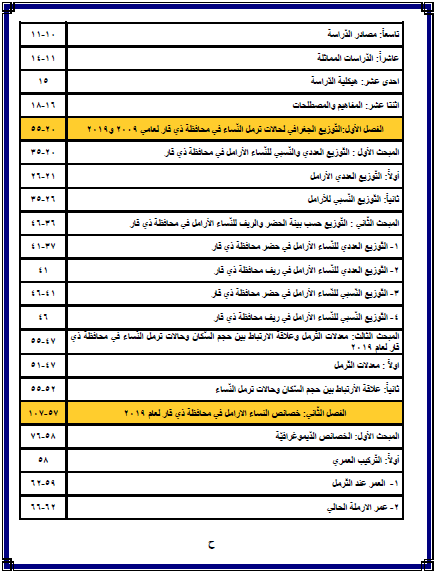 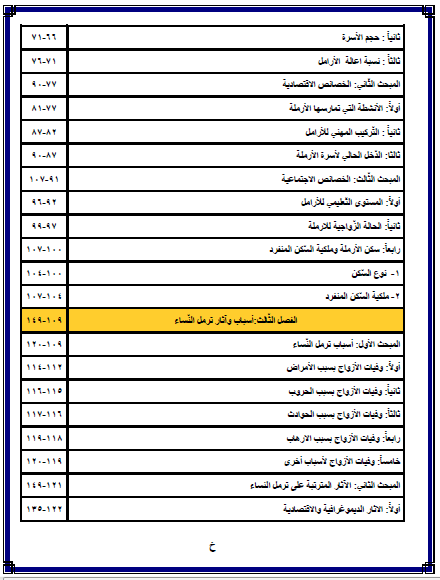 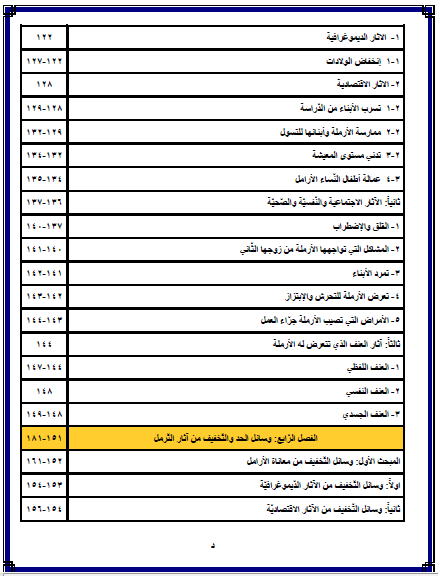 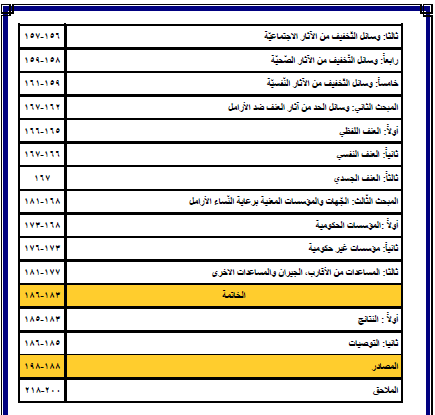 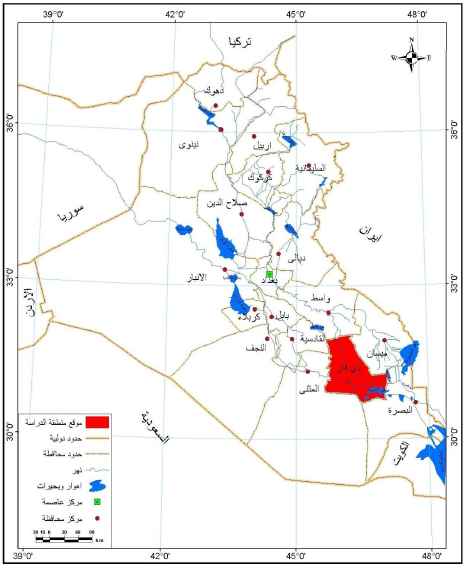 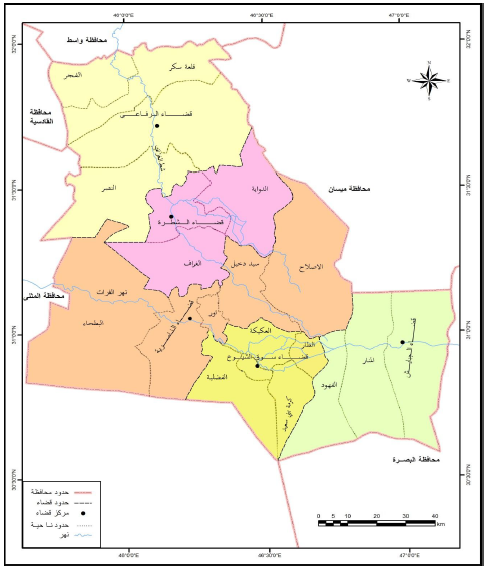 Geographical analysis
of the widowhood phenomenon
in Thi Qar Governorate
A Thesis presented by
Afrah Abbas Tashheel
To
Council of the Faculty of Literature - University of Thi Qar It is part of the requirements obtain a Master of Literature degree in geography
Supervised by
Prof. Dr.
Hussein Uleiwe Nasser Al-Zyyadi
1441 AH 2020AD 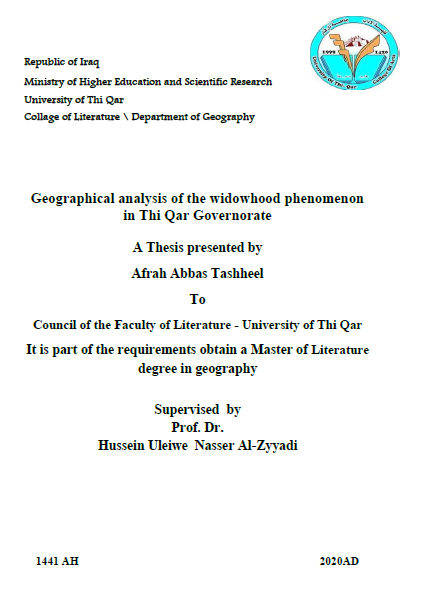 Abstract:
Geographical analysis of the widowhood phenomenon in Dhi Qar
Afrah Abbas Tashheel - Prof. Dr. Hussein Uleiwe Nasser Al-Zyyadi
The study dealt with a social phenomenon that spread widely, and is remarkable in Iraq in general and in the Dhi Qar Governorate in particular, because of the many wars that have passed in the country, terrorist operations, frequent incidents, insecurity, disease outbreaks, and the deterioration of political, social, and economic conditions.
The study aims to know the size of the widowhood phenomenon in Dhi Qar Governorate, and its variation in time and space, according to administrative units and environmental distribution. So the importance of this study came from being the first in the province of Dhi Qar, and emphasized the study of the geographic distribution of widows between administrative units in the study area, as well as the difference between urban and rural areas, as well as identifying the causes and effects of this phenomenon; as it has become a problem facing a layer of the population, In the study area after the wars and blockades that Iraq has gone through, and many incidents.
The study population included widowed women in Dhi Qar governorate, whose number is (18048) widows, distributed among the administrative units in the study area, and the adult (20) administrative units represented by (5) districts centers and (15) sub-districts, and the study was relied on The field, as a questionnaire was prepared for the year 2019 at a rate of (10%), so the size of the research sample amounted to (1805) questionnaires, which were distributed by the intentional sample method according to the number of widows in Dhi Qar governorate for the year 2019.
The analytical method was mainly employed in the study and analyzed in all its aspects. To uncover the interrelationships between different phenomena, as well as adopting the descriptive approach using the quantitative method that relies on analyzing data and geographical information related to the phenomenon studied.
The study reached a number of results, the most prominent of which was the clear variation in the number of widows between 2009 and 2019, and the high rate of crude widowhood in Dhi Qar Governorate to reach (83.9%), which indicates that the widowhood phenomenon in Dhi Qar Governorate warns of a problem that must be Beware of them, and the correlation between the widowhood and the population size was a very strong direct relationship, reaching (0,983).
تحميل النص الكامل
⇊
↲   top4top
↲   mega.nz
تعديل المقال
الأقسام الجغرافيا البشرية رسائل علمية