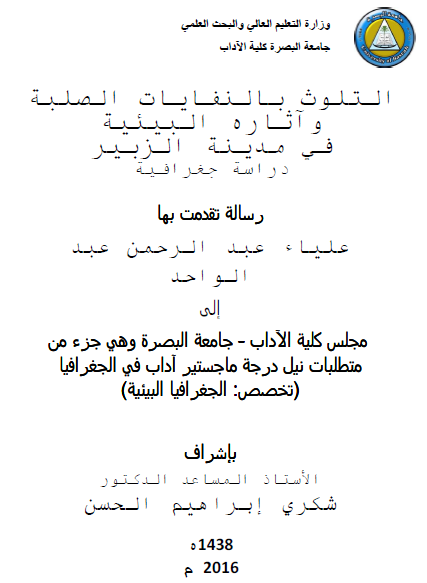 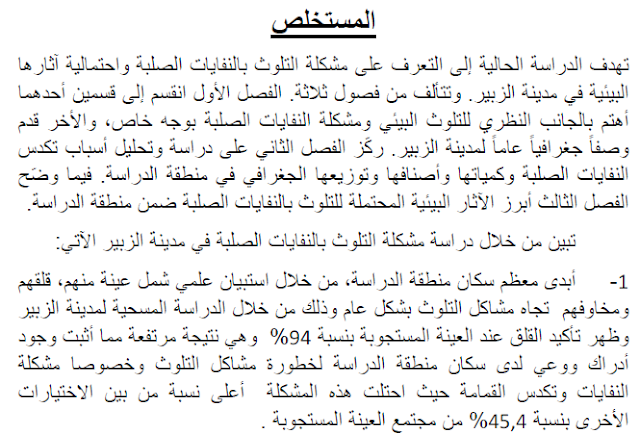 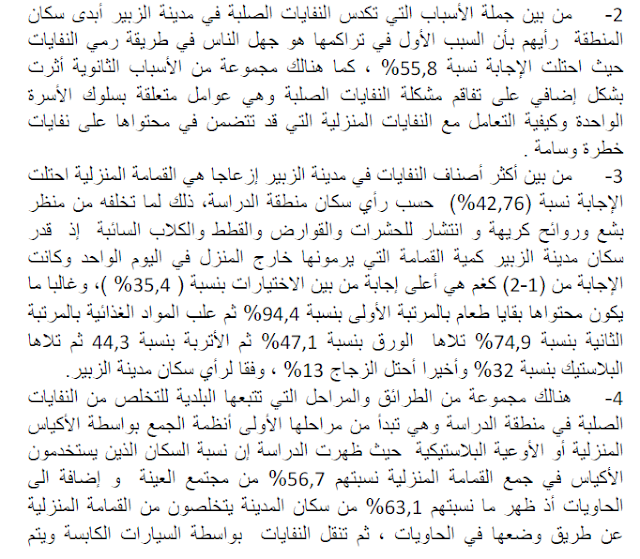 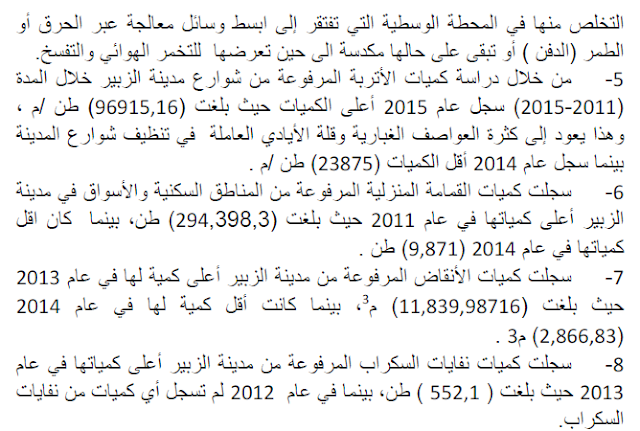 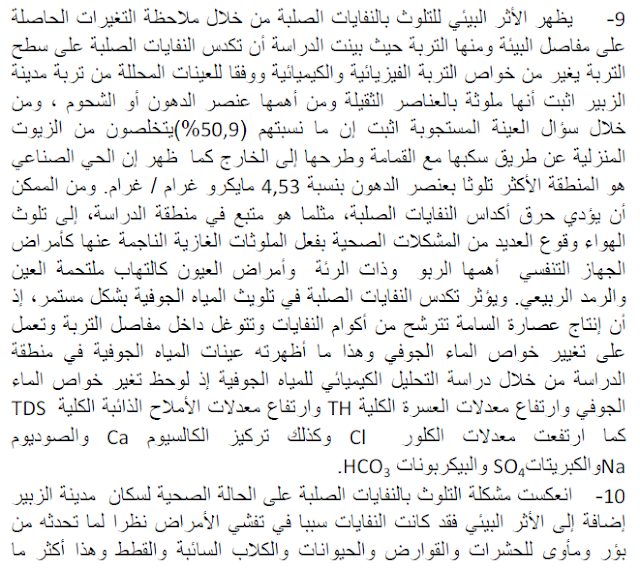 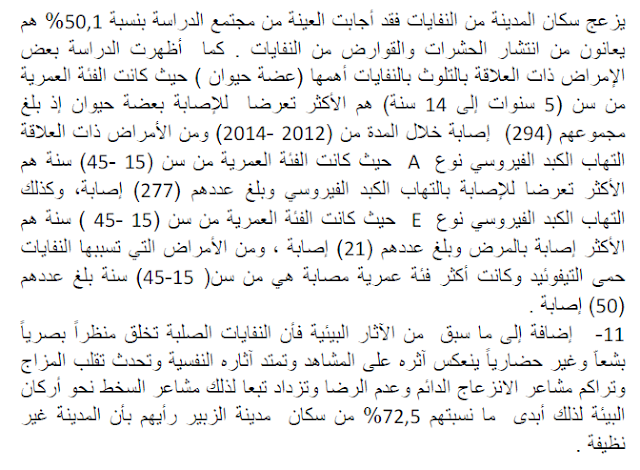 A Geographical Study
A Thesis submitted To
The Council of Collage ofArts / University of
Basra in Partial Fulfillment of the Requirements of M.A. Degree in Geography
Environmental Geography
By
Alyaa' AbdulRahma AbdulWahid
Supervised by
Assist. Prof.
Shukri I. Al-Hassan
1438H - 2016 A.D 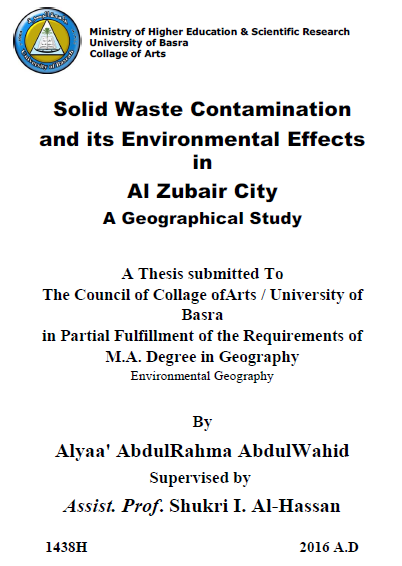 Abstract
The aim of the study is to shed light on the contamination with solid waste and the way it affects the environment in Al Zubair city; the research is divided into three chapters. The first Chapter includes two partitions one of which deals with the basic information about the environmental contamination which is a key issue to be tackled, the second one represent the geography of the study zonewith regard to nature and human population. The second chapter is of three partitions: the first one is about the main reason behind the gathering of solid wastes in the study zone, while the second partition deals with the kinds of waste in it. The third one deals with amount of solid wastes distributed in Al Zubair city – which has increased recently in (2011-2015), the ways of disposing waste, and its geographical distribution in the study zone. The third chapter is of three partitions too. The first one deals with the environmental effects caused by solid wastes on the three factors of the environment (soil, groundwater, air). The second partition tackles health effects of contamination with solid waste(studying Al Zubair health condition). For it has been proven that the gathering of solid waste causes many diseases. Also, the third partition examines the badview of the city caused by hard waste.
Studying contamination with solid waste has shown the following:
1 – 94% of city population questioned in the survey has shown their concern about environmental contamination in general. Such a percentage is considered high and proved people to be aware of the danger of contamination specially the gathering of refuse in the city which an issue that has the highest percentagereaching 45,4% among other tackled issues.
2 – As to 55.8% people questioned, one of the main reasons behind the random gathering of rubbish is people being ignorant of the proper way of disposal, also the waythe family deals with its own waste which sometimes can be dangerous and poisoning.
3 – 42.7% of people think that the most disturbing kind of waste is that of houses for the bad view and smell which attract the insects, rodents, cats, and dogs. 35.4% of People - which is the highest percentage of all - have estimated the amount of refuse to be (1-2) kg sorted in sequence; 94.4% food refuse,74.9% empty food cans,47.1% paper, 44.3% soil, 32% plastic, and finally 13% glass.
4 –Municipality procedures start with collecting refuse with household bags and plastic/metal containers. As to the survey, 56.7% people use bags to collect refuse, while 63.1% of them use containers to collect refuse, place it in cars waste,and throw it in a spot which have no proper way of recycling waste. It is being processed by either burning or burying, or sometimes is simply gathered there until it is disintegrated.
5 – Examining the soil collected from the city in (2011-2015) has shown that 2015 has the highest amount of soil for it has reached 96915.16 ton/m. This is because:increasing of house refuse, frequent sand storms, and lack of manpower to clean streets. Yet, 2014 has the lowest amount which is 23875 ton/m.
6 – The highest amount of house and market refuseis in 2011 reaching 249.398.3 ton, while the lowest is in 2014 reaching 9.871.
7 – The highest amount of rubble collected in Al Zubair city is in 2013 reaching 11.839.98716 m3, while the lowest is in 2014 reaching 2.866.83 m3.
8 – The highest amount of scrap (old left furniture and wracked vehicles.. ect.) is in 2013 reaching 552.1 tons, while there is none in 2012.
9 – The environmental effect of contamination with solid waste is characterized with the changing in the physical and chemical properties of the soil. By processing samples of soil in Al Zubair city, it is proved that it is contaminated with oils and fats. 50.9% of people questioned say that they get rid of oils and fats by simply pouring them into rubbish. 4.53 microgram/gram of Hay Alsinaay (the industrial neighborhood) is contaminated with fats. The study also shows that burning waste produces gases and poisoning steams,which change air properties and contribute to the global warming. In fact, burning a little amount of waste produces some gases such as 150 ppmof CO, 1120 ppmof CO2, 10.0 ppm 213 of NOx, 3.70 ppm ofSO2, 20.0 ppm of HCs, and less than 0.2 ppm ofH2S. These gases causes so many respiratory diseases to the locals; such as asthma, and pneumonic. Also, it causes eye diseasesuch as; conjunctivitis, and spring infection. The continuous precipitating of waste produces a poisoning juice which penetrates the soil leading to a change in the properties of its groundwaterand to a rise in TH, TDS, CL, CA, SO4, and HCO3.
10 – Contamination with solid wastehas bad influence on the healthwelfare of the locals as well as the environment.33,6% people say that waste has been a shelter for insects, rodents, animals, dogs, and cats.It isvery disturbing to locals and causes many diseases. The survey shows that the most common issue because of waste is an animal bite. Children (5-14 year old) are the most likely to be exposed to it; in 2012- 2014, (294)of children have been bitten. People aged 15-45 years old are most likely to be infected with Hepatitis/Aand 277 of them caught it while 21 of them caught Hepatitis/E,50 of them infected with typhoid.
11 – Having said that, solid wastehas a bad and uncivilized view of the city, which might affect people's emotions causing mood swinging, dissatisfaction, and discontent towards the city and its environment in general. That is why 72.5% of people questioned say that the city is NOT clean.
تحميل النص الكامل
⇊
↲             top4top
↓
↲           mega.nz
تعديل المقال
الأقسام الجغرافيا الطبيعية رسائل علمية