Increasing the resolution of a raster using Downscaling in QGIS

Increasing the resolution of a raster using Downscaling in QGIS 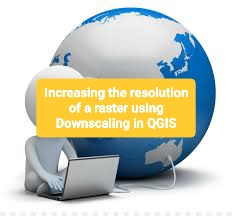 Geographically Weighted Regression (GWR) is an interesting method with many applications. GWR is different from other techniques because it allows the relationships between covariates to vary spatially. For some research questions, it is useful to use the GWR to see where they are more or less spatially variable.

SAGA’s GWR for Raster Downscaling tool allows downscaling by means of a technique called Downscaling. In QGIS (it can also be run directly in SAGA) it is located at:

As Predictors, select the digital elevation model (DEM, 30×30), and in Dependent Variable use the temperature raster (1000×1000, obtained from WorldClim).

Only apply this technique if there is a high correlation between the variables (in precipitation it usually does not work). You can also see the videotutorial in this link (Spanish).