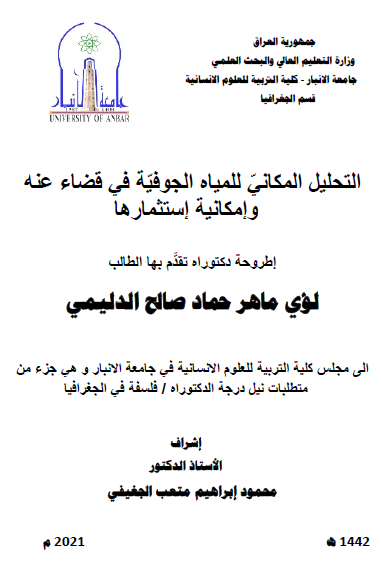 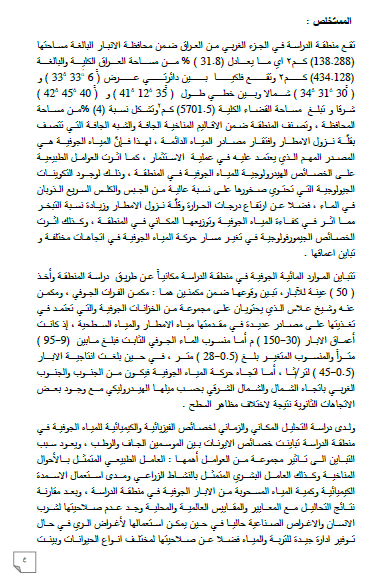 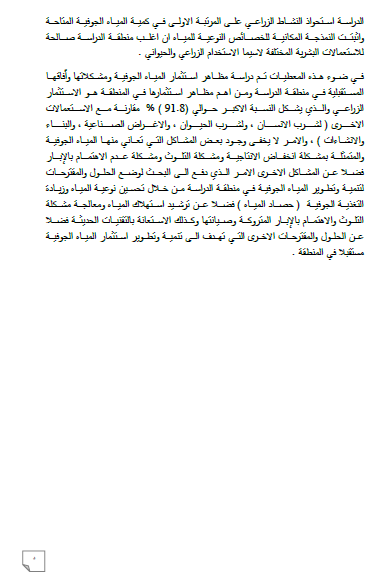 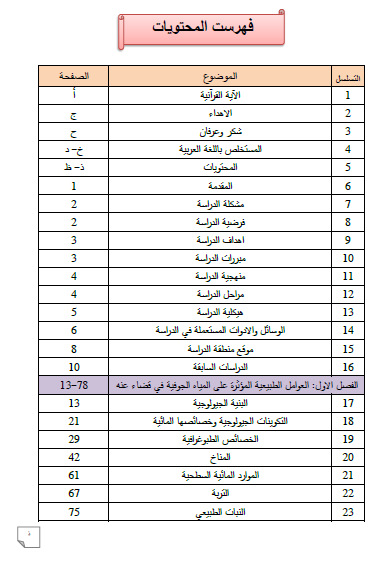 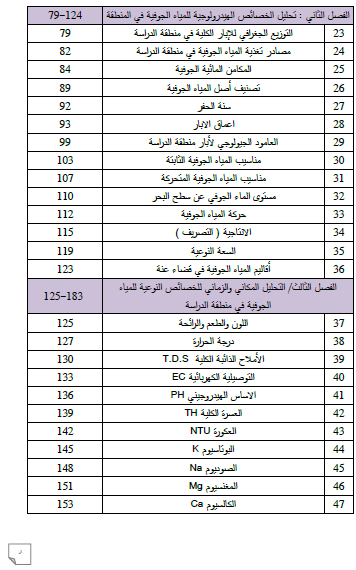 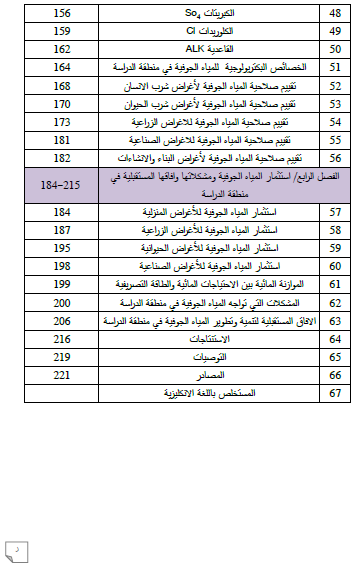 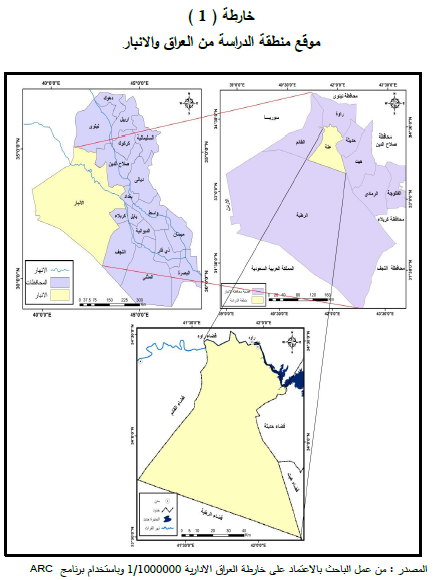 Spatial Analysis of Groundwater in Anah District and the Possibility of its Investment
A Thesis Submitted to the Council of the College of Education for Humanities/ University of Anbar in Partial Fulfillment of the Requirements for the Degree of PH.D in the Philosophy of Geography
By:
Luai Maher Hammad Salih Al-Dulemi
Supervised by:
Prof. Dr. Mahmoud Ibrahim Muteb Al-Jaghifi
2021 A.D. - 1442 A.H. 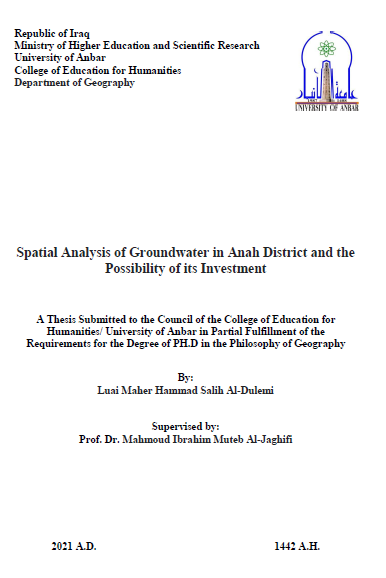 Abstract:
The study area is located in the western part of Iraq within the province of Anbar, with an area of (138,288) km2, equivalent to (31.8) of the total area of Iraq, amounting to (434,128) km2. It is located astronomically between the two latitude circles (33, 33.6) and (30, 31, 34) north and between Longitude (41,12 ° 35) and (40-18 ° 42 °) east. The total area of the district is (5701.5) km2 and constitutes (4) % of the governorate area. The region is classified within the arid and semi-arid climatic regions that are characterized by low rainfall and a lack of permanent water sources. Therefore, groundwater is an important source on which the investment process depends.
The natural factors also affected the hydrological characteristics of groundwater in the region due to the presence of geological formations whose rocks contain a high percentage of gypsum and lime that dissolve in water quickly. High temperatures, low rainfall and increased evaporation are other factors which affected the efficiency of groundwater and its spatial distribution in the region. The geomorphological characteristics also affected the change in the path of groundwater movement in different directions and the variation of its depths.
Underground water resources in the study area vary spatially by studying the area and taking (50) samples of wells. They are located within two reservoirs, namely the Euphrates underground reservoir, Anah and Sheikh Alas reservoir which contain a group of underground reservoirs. They depend for their feeding on several sources, foremost of which is rain and surface water. The depths of the wells were (150-30) m.
The constant groundwater level ranged between (9-95) meters and the variable level reached (0.5-28) meters, while the productivity of the wells reached (0.5- 45) liters / second. The direction of groundwater movement is from the south and southwest towards the north and northeast according to its hydraulic inclination, with some secondary directions due to different surface appearances.
The study of spatial and temporal analysis of the physical and chemical properties of groundwater in the study area shows that the properties of ions varied between the dry and wet seasons. The reason for this variation is due to the influence of a group of factors. The most important of which is the natural factor represented by climatic conditions as well as the human factor represented by agricultural activity, the extent of using chemical fertilizers and the amount of water withdrawn from ground wells in the study area.
After comparing the results of the analysis with international and local standards, it was found that they are not suitable for human drinking and industrial purposes at present. They can be used for irrigation purposes if there is a good soil and water management. They are also suitable for various types of animals. The study showed that the agricultural activity took first place in the amount of available groundwater, and the spatial modeling of the qualitative characteristics of water proved that most of the study area is suitable for different human uses, especially agricultural and animal use.
In light of these data, aspects of groundwater investment, its problems and future prospects in the study area were studied. One of the most important aspects of its investment in the region is agricultural investment, which constitutes the largest percentage about (91.8)% compared to other uses (for human drinking, animal drinking, industrial purposes, building and constructions).
It is not a secret that there are some problems that groundwater suffers from, represented by the problem of low productivity, the problem of pollution, the problem of lack of interest in wells, as well as other problems. These problems activates the research to present solutions and proposals for the development of groundwater in the study area by improving water quality and increasing the feeding of groundwater (water harvesting), as well as rationing water consumption, addressing the problem of pollution, taking care of wells and maintaining them. Using modern technologies as well as other solutions and proposals aimed at developing the investment of groundwater in the region in the future.
تحميل الأطروحة
👇
👈   top4top-download-rar
👇
👈   mega.nz-download-rar
تعديل المقال
الأقسام الجغرافيا الطبيعية رسائل علمية