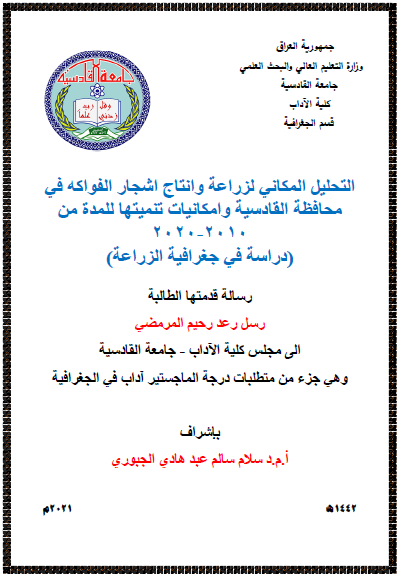 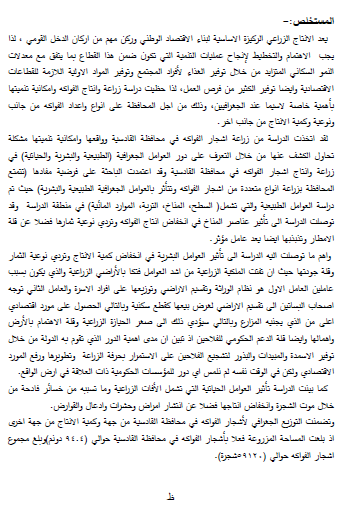 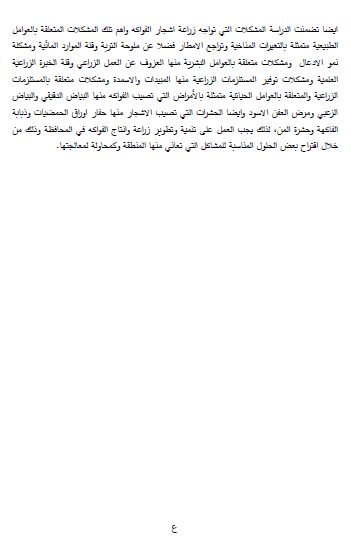 Spatial Analysis of Fruit Tree Cultivation in Qadisiyah Province and Its Development Potential
A THESIS
Submitted by:
Rasul Raad Rahim Al Marmadi
To the Council of the College of Arts at the University of Al-Qadisiyah It is part of the requirements for the Master of Arts degree in Geography
Supervised by:
Prof. Dr.
Salam Salem Abd Hadi Al-Jubouri
1443 A.H - 2021 A.D 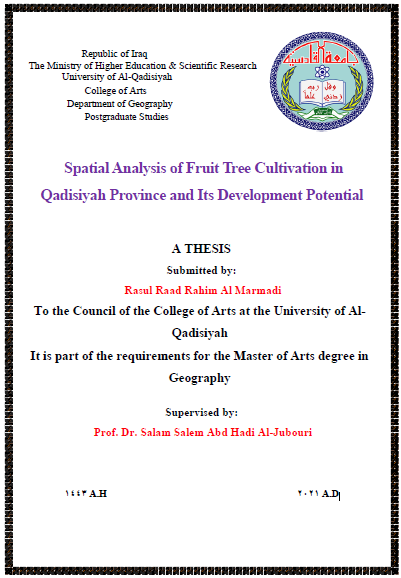 Agricultural production is the mainstay of building the national economy and an important pillar of the national income. Therefore, attention and planning must be made for the success of the development processes that are within this sector in line with the increasing population growth rates by providing food to members of society and providing the necessary raw materials for the economic sectors, as well as providing a lot of employment opportunities. Therefore, studying the cultivation and production of fruits and the possibility of developing them was of special importance, especially for geographers, to preserve the types and numbers of fruits from one Gantt and the quality and quantity of production from another Gantt.
The study has taken the cultivation of fruit trees in Al-Qadisiyah Governorate, its reality, and the possibility of its development, as a problem that it is trying to reveal by identifying the role of geographical factors (natural, human, and life) in the cultivation and production of fruit trees in Al-Qadisiyah Governorate. Fruit trees are affected by natural and human geographical factors), where the natural factors, which include (surface, climate, soil, water resources) were studied in the study area. influential factors.
The most important finding of the study is the impact of human factors on the decrease in the quantity of production and the deterioration in the quality of fruits and their low quality, as the fragmentation of agricultural ownership is one of the deadliest factors in agricultural land, which is caused by two factors. Dividing the lands to sell them as housing plots and thus obtain a higher economic resource than the farmer reaps. This will lead to a small agricultural holding and a lack of interest in and neglect of the land, as well as the lack of government support for farmers. To continue the craft of agriculture and develop it and raise the economic resources, but at the same time, we did not see any role for the state on the ground.
The study also showed the impact of biological factors that include agricultural pests and the heavy losses they cause through the death of the tree and the decline in commercial value, as well as the spread of disease pests in the region, jungles, and rodents.
It included the geographical distribution of fruit trees in the province of Qadisiyah on the one hand and the quantity of product on the other. The study also included the problems facing the cultivation of fruit trees and future trends for the development and development of fruit cultivation and production in the governorate, by suggesting some appropriate solutions to the problems that the region suffers from and an attempt to address them. 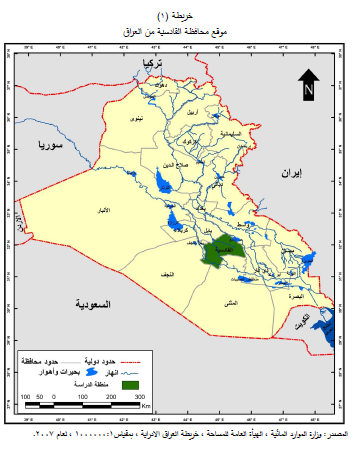 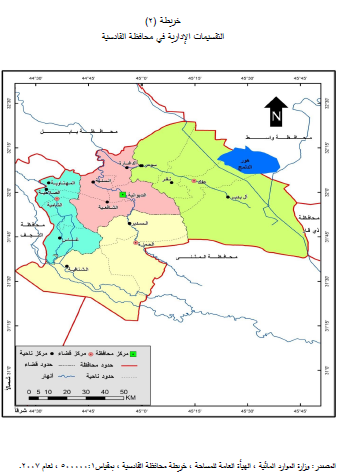