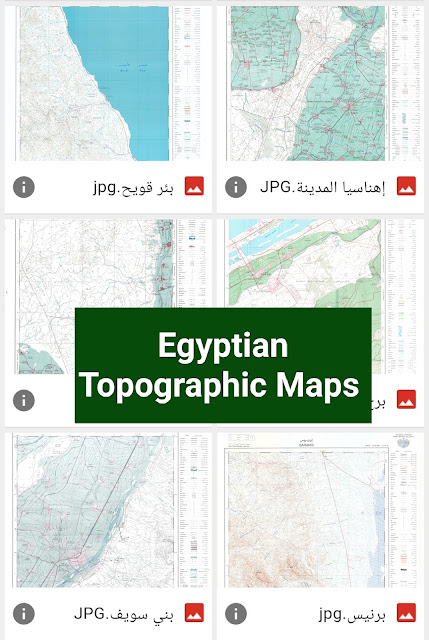 One link, ready to be downloaded directly. Maps of the Arab Republic of Egypt issued by the Egyptian General Authority for Surveying. You can download it now with a direct link. If you are a student or researcher and looking for topographic maps of any region, we believe that you will like this topic and you will find all the maps you are looking for in one file. .

A very large collection of topographic maps Egyptian maps, which are used in all fields and the preparation of scientific research and master's and doctoral theses, exclusively on our website

and ready for download. Maps at a scale of 50,000 are considered one of the best and most widely used maps. Today, we present to you the topographic maps of the Egyptian lands on the Geography Treasury website.

Share the link for all those interested in downloading the topographic maps most used in geographical research Topographic maps include many phenomena, including level points, contour lines, urban areas, agricultural basins, road network, railways, canals, banks, waterways, natural phenomena and many other phenomena. The maps are modern produced by the Egyptian General Authority for Survey, and are available for use directly or through map processing programs and software systems. Geographical information, a huge group of topographic maps that includes all the phenomena and covers all parts of the Arab Republic of Egypt. You can download the Egyptian topographic maps from our website via the following link below... A large group of Egyptian maps, on a scale of 50 thousand, in the link: From here, good luck, God willing Maps Egyptian Topographic Scale 50000 Downloadable Topographic maps