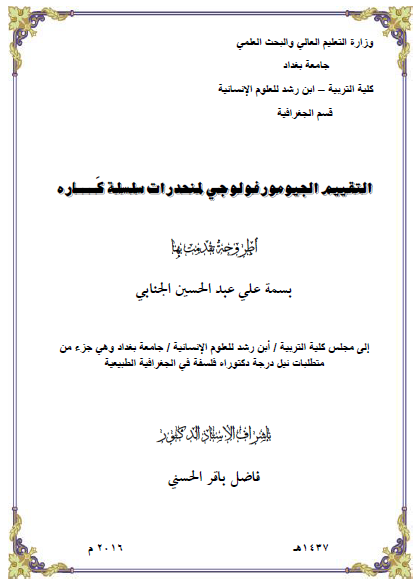 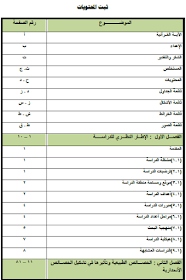 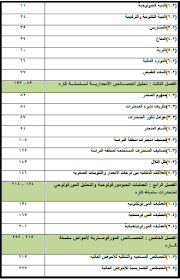 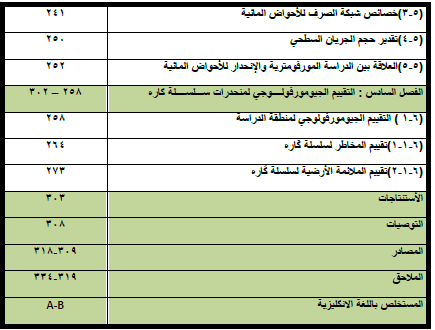 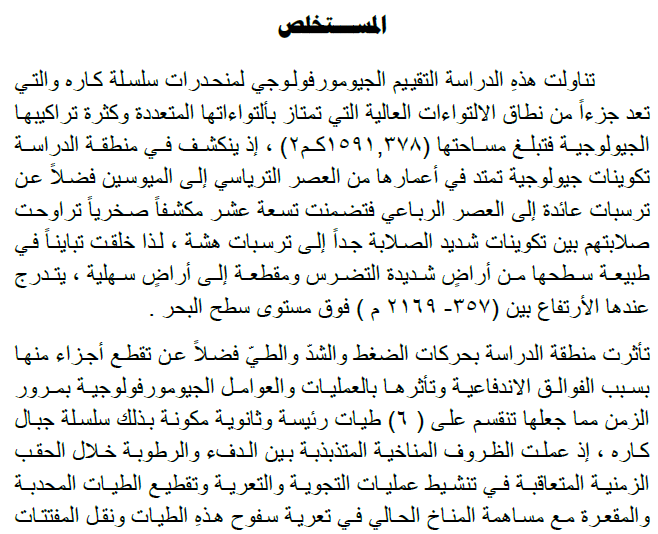 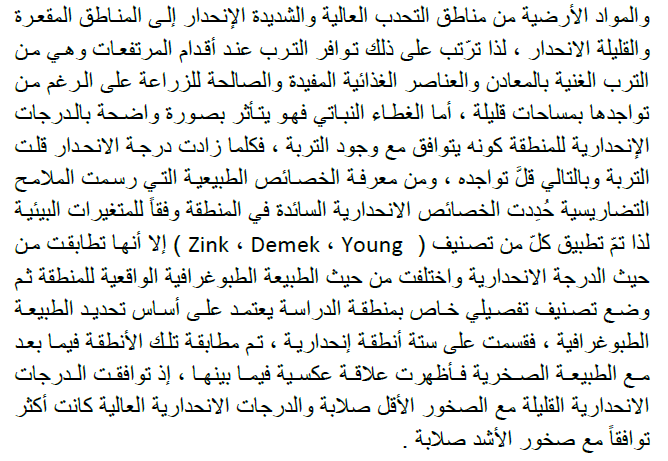 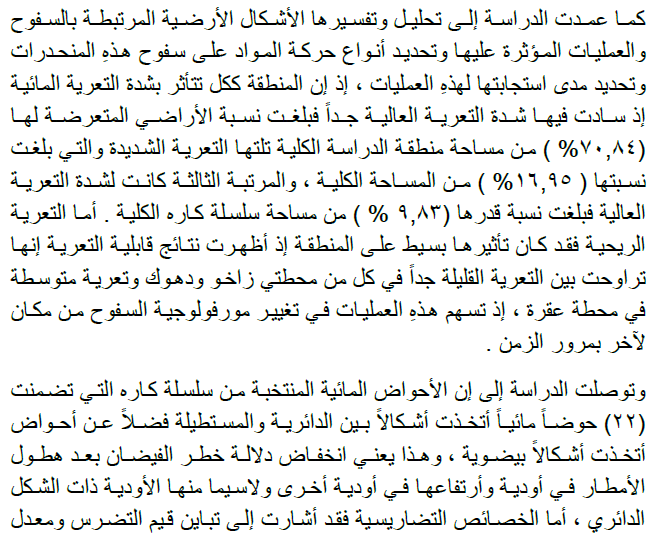 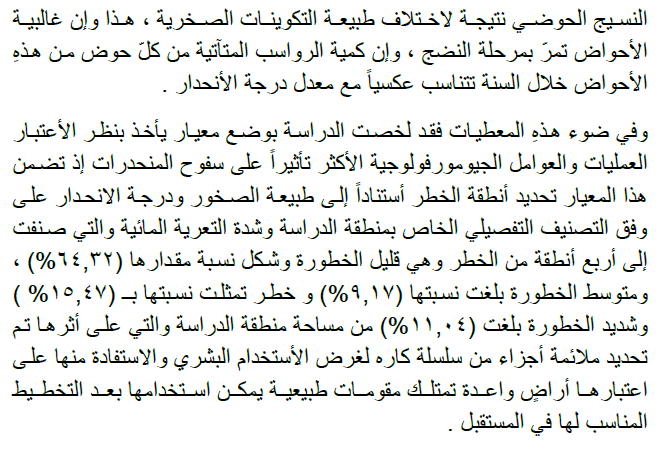 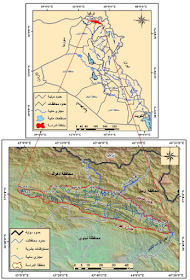 The Geomorphological Evaluation of the Slopes to Gara Chain

A Thesis Submitted By
Basmah Ali Abdul Hussein Gazy AL- Janaby
To The Council of the College of Education for Human science / Ibn – Rushd University of Baghdad in Particle Fulfillment of the Requirements for the Degree of P.H.D in Physical Geography
Supervised BY
Professor Dr.
Fadel Baker Al- Hassani
1437 H - 2016 A.D 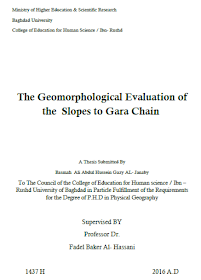 Abstract
This study evaluation Geomorphologicaly the slopes of Gara chain , which is part of a high folded zone characterized by multiple folded and frequent geological structures of an area (1591.378 km 2), as revealed in the study geological formations area stretching in ages from the Triassic to the Miocene as well as deposits of returning to Quaternary age include nineteen exposed rock ranged between very extreme rigidity to fragile depositions , so it created a divergence in the nature of the surface of the severe land terrain and cut into plain land, then graded height between (357- 2169 m) above sea level.

The study area Affected by pressure , tensile and folding movement as well as cut off parts of them because of faults impulsivity and also been affected by the Geomorphological operations and prime factors over time, making it divided into (6) folds President and secondary , forming the Gara chain mountain hater, the climatic fluctuating conditions of warmth and humidity during successive time intervals work in the revitalization of erosion and weathering processes and cutting convex folds and concave with the current climate contribute to the erosion of the slopes of these folds fragments and ground materials transport of high convexity and extreme regions of regression to the concave and the less gradient slope , so the consequent availability of soil at the feet of the highlands and is considered one of the rich soils of minerals and elements useful arable despite the presence a few area , and the vegetation is affected clearly by the degree regression of the area being consistent with the presence of soil, higher the degree gradient less the soil and thus less it's presence, and knowledge of the natural characteristics that draw terrain features identified regression characteristics prevailing in the region, according to environmental variables so was applied both rating (Young, Demek, Zink) but it is matched in terms of class regressions differed in terms of topography realism of the area, so we've put a detailed classification of a special study area depends on the basis for determining the topographical nature, so it divided in to six regional slopes , it has been matching those regions later with rocky nature so it result inverse relationship between them.

The study proceeded to analyze and interpret landforms associated with slopes and processes affecting them and determine the types of material movement on the slopes of these cliffs and determine the extent of their response to these operations, as the region as a whole strongly water erosion affected as prevailed where the intensity is very high erosion amounted percentage (70.84%) of the total area of the study area, followed by severe erosion, which amounted percentage (16.95%) of the total area, and third place it was the intensity of high erosion, reaching a rate of (9.83%) of the total Gara chain space. The wind erosion was simple impact on the region as erosion susceptibility results showed that it ranged from very few erosion in each of the stations Zakho and Dohuk and medium erosion in Aqra station, making these processes contribute to changing the morphology of the slopes from one place to another over time.

The study found that the elected water basins of the Gara chain , which included (22) basin hydraulically taken forms between circular and rectangular as well as basins taken an oval forms , this means lower signify the risk of flooding after heavy rain in the valleys and high in other valleys, particularly those valleys with a circular shape, The terrain characteristics has indicated that variation terrain values and the rate of basin texture as a result of the different nature of the rock formations, that although the majority of basins undergoing maturation, and the amount of sediment derived from each of these basins during the year is inversely proportional to the degree of regression rate.

In light of these data, the study summarized by setting a standard takes into account the processes and factors Geomorphological most influential on the slopes of the cliffs as this standard ensures determine the reagon risk based on the nature of the rocks and the degree of regression according to the rating for the detailed study area and intensity of water erosion, which are classified into four reagon of danger which is low-risk represented a percentage (64.32%), and the average risk, which represented (9.17%) the risk represented by percentage (15.47%) and extremely dangerous was (11.04%) of the study area and an area that has been its impact on determine the appropriate parts of the Gara chain for the purpose of human use and benefit as a promising lands possess natural ingredients can be used after a proper planning in the future . 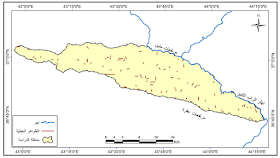 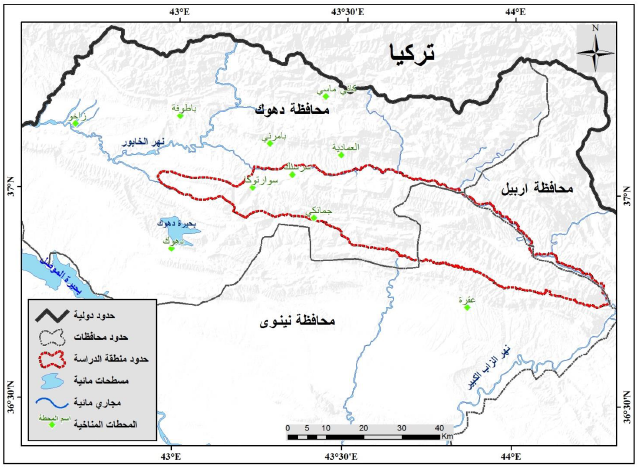