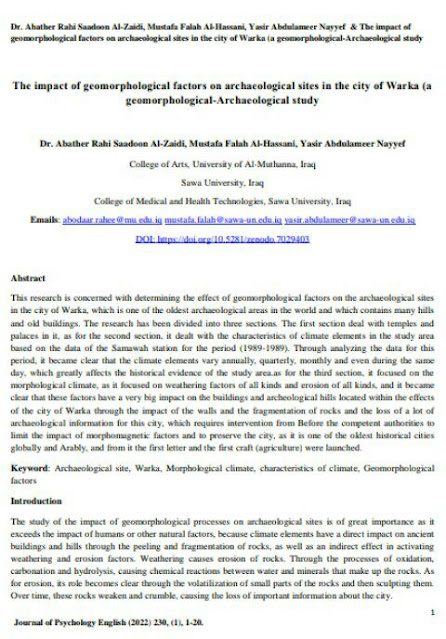 Dr. Abather Rahi Saadoon Al-Zaidi, Mustafa Falah Al-Hassani, Yasir Abdulameer Nayyef
College of Arts, University of Al-Muthanna, Iraq Sawa University, Iraq College of Medical and Health Technologies, Sawa University, Iraq
Journal of Psychology English (2022) 230, (1), 1-20.
Abstract This research is concerned with determining the effect of geomorphological factors on the archaeological sites in the city of Warka, which is one of the oldest archaeological areas in the world and which contains many hills and old buildings. The research has been divided into three sections. The first section deal with temples and palaces in it, as for the second section, it dealt with the characteristics of climate elements in the study area based on the data of the Samawah station for the period (1989-1989). Through analyzing the data for this period, it became clear that the climate elements vary annually, quarterly, monthly and even during the same day, which greatly affects the historical evidence of the study area.as for the third section, it focused on the morphological climate, as it focused on weathering factors of all kinds and erosion of all kinds, and it became clear that these factors have a very big impact on the buildings and archeological hills located within the effects of the city of Warka through the impact of the walls and the fragmentation of rocks and the loss of a lot of archaeological information for this city, which requires intervention from Before the competent authorities to limit the impact of morphomagnetic factors and to preserve the city, as it is one of the oldest historical cities globally and Arably, and from it the first letter and the first craft (agriculture) were launched. Keyword: Archaeological site, Warka, Morphological climate, characteristics of climate, Geomorphological factors
Download
تعديل المقال
الأقسام الابحاث الجغرافيا الطبيعية